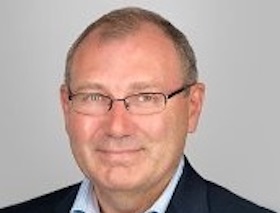 Allan Lane, partner and co-founder of Algo-Chain chaired the event, with Jan Gottschalk, partner, INVAO Group and Patrick Grewe, a portfolio manager with Plutos Vermogensverwaltung AG.Seminar speaking.
Lane’s own findings on the advantages of adding crypto assets, through ETPs, as a diversifier into a model portfolio can be found on the Algo-Chain website, which details the advantages at two different levels. And Algo-Chain’s findings are supported by a recent paper from The Man Institute which also asked if cryptocurrencies could be a useful diversifier in a multi-asset portfolio, and what might be an optimal allocation if so.

The Man Institute’s findings were that while bitcoin has had six 50 per cent+ drawdowns in its history, the fact that it is still a major force may indicate that its volatility is part of the early price discovery process for a new asset class.

Man writes: “In addition, we believe we are early in the institutional investor adoption cycle. If the ‘bitcoin-as-digital-gold’ argument is right (and it is a big ‘if’) then a price target north of USD400, 000 is possible.
“Even for the instinctive sceptics (such as ourselves) the strength of these arguments has now reached the point where we have to think seriously about where crypto could fit into a multi-asset portfolio.

“Despite its exceptionally high volatility, over the last decade bitcoin has still registered by far the highest Sharpe of any major liquid asset class, at 2.3. In general, bitcoin has been a great diversifier. Its average absolute pairwise correlation with other asset classes is practically zero.

“BUT in market stress environments this benefit is greatly reduced. Where equities experience a 5 per cent monthly drawdown, bitcoin is also negative 86 per cent of the time. Putting this together, we follow a number of quantitative optimisation methodologies which suggest a crypto allocation of up to 5 per cent could be justified.

“However, we think it would be wise to err on the side of caution and allocate a small amount, fund prospectus and regulation allowing. The risks are clear: a lack of solid intrinsic value methods, regulation and, for bitcoin specific investors, the danger that the token loses its lustre within crypto due to its less attractive characteristics.”

Speaking at the Algo-Chain webinar, Lane said that there has been a sea change in wealth management over recent years and it was essential for the industry to grow further. Gottschalk explained that INVAO Group is part of a family office based on fintech businesses and a desire to find solutions for investors who want to invest in cryptocurrenciecs or make use of blockchain technology.

Grewe explained that Pluteus is a new wealth manager with EUR600 million in assets offering crypto asset management for private customers and institutions.

Grewe said: “Wealth managers are normally conservative and not so open minded but we are one of the first to include cryptocurrenciecs in normal customer portfolios and use them for better performance.”

Gottschalk explained that the advantages of blockchain technology are that it is very safe. “You can put any financial asset onto a blockchain which makes it tradeable,” he said. “97 per cent of the cost for the client has been saved through this way of transferring and trading items and what we have seen in the last years has been a doubling of assets held in blockchain. It’s an exponential development like what we saw in the development of the internet. Internet user numbers have grown 68 per cent year on years but wallet users have seen growth of 113 per cent in past years.”

Addressing the ESG concerns about bitcoin and other cryptocurrency mining activities, Gottschalk noted that miners are driven by energy prices, looking for lower energy prices. “They go where the electricity is cheap so that might be windmills in Mongolia where the overnight energy, which might be wasted, can be used to mine efficiently.” Gottschalk claimed that 70 per cent of each mining electricity unit is sustainable, coming from windmills, geothermal sources or hydro plants.

Both speakers discussed El Salvador, which has adopted bitcoin as legal tender, with Gottschalk reporting that at a recent cryptocurrency conference, a congressman from El Salvador claimed that the move had been a success with the profits put into children’s hospitals and schools.

The government has announced a bitcoin city, close to a volcano which delivers cheap energy.
Gottschalk said: “This is kind of blowing up the fiat value of paper money. They have sustainable energy and mining which is helping a community to grow. Before they had the bitcoin they were dependent on the US dollar and had no influence on their own currency.”

He cited statistics that show that before the introduction of bitcoin as legal tender, 30 per cent of the people had a bank account, but now 80 per cent have a wallet which enables them to transfer money from one wallet to another.

Lane quoted a recent news report that in China, 140 million people have opened wallets in readiness for the new China coin, with USD10 billion in assets in those wallets.

Gottschalk described cryptocurrencies as disruptive technology. “People are starting to reduce their risk in the fiat currency with the use of cryptocurrencies,” he said. “Banks can certainly profit from these new strategies and every central bank should have its cryptocurrency and it should be done quickly.”