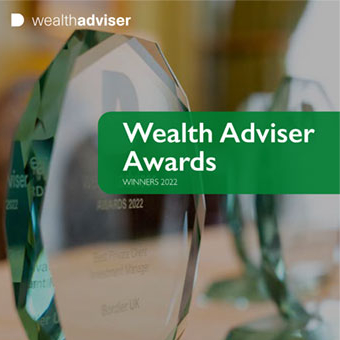 A welcome return for the Wealth Adviser Awards

The Wealth Adviser awards were last held in 2019 and, due to the pandemic, have only just returned this year, with their 12th iteration.

The Wealth Adviser awards were last held in 2019 and, due to the pandemic, have only just returned this year, with their 12th iteration.

Just three years ago, 2019 does seem like a very different time, but there is plenty of evidence that, during lockdown, investors took a keener interest in their financial affairs.

Recent research from Hargreaves Lansdown revealed that almost three quarters of individuals they surveyed made new habits during the pandemic and over 90 per cent have kept at least one of them.

Luckily, for almost three quarters of those surveyed, that habit was based on money-saving and that cash is hopefully going to help keep finances resilient during the coming wave of price rises and inflation.

Recent figures from earlier this year from the lang cat found that in volatile markets, total platform assets across all platforms in Q1 2022 fell by -2.66 per cent on Q4 2021 values, while advised platform assets performed slightly better (-2.42 per cent).

In terms of sales, gross flows across all channels were down -21.89 per cent on Q4 2021’s totals, while net sales are down -44.68 per cent, indicating outflows have risen across the market.

Rich Mayor, senior analyst at the lang cat, commented: “Around two-thirds of total platform gross sales came from advisers, but advised net sales formed just shy of 90 per cent of the total net sales. This indicates that while outflows have increased, it is focused in other channels such as D2C, proving the value of advisers in reassuring clients and staving off snap decisions to sell at potentially the worst time.”

Wealth managers and advisers are more important in many people’s lives now than they were back in that very different world in 2019 when we had our last outing for the Wealth Adviser awards.

Congratulations to our winners.

To return to the Wealth Adviser Awards’ Report 2022 click here.